The moment my opponent attempted a foot sweep in the early seconds of the match, I knew he was better at takedowns than me. Although my opponent didn’t score the takedown, his timing was fantastic and he forced me to scramble to avoid giving up the points.

It was the semi-finals of the Europeans, so the slightest mistake could’ve cost me the shot as the gold.

Rather than butt heads with a superior takedown player, I switched strategy and pulled him straight into my guard game. From my guard, I was able to tie him up in knots and secure the victory despite being nearly knocked unconscious partway through the match.

If I’d continued with my initial takedown game plan, I probably would’ve been tossed on my head, lost the fight, and my chance at European gold. That’s how important starting a fight can be, particularly when you and your opponents skill-levels are similar.

If you start the right way, you can put your opponent under pressure and be ahead before they know what’s happening. On the other hand, if you start the wrong way, a Jiu Jitsu match can be a miserable, uphill battle, and end in crushing defeat.

This understanding of how to start a match is something regularly teach and it’s a big part of why our students been doing so well in competitions.

Unfortunately (and thankfully for our students), how to start a match is an often a very neglected area of Jiu Jitsu instruction.

So Chelsea and I decided to do something about it. Last weekend, we taught an open seminar covering the three scenarios you’ll encounter at the start of a match, plus the best way you can use each to your advantage. 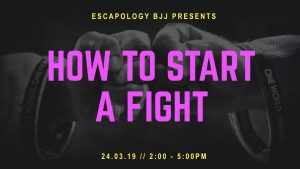 Now, I didn’t expect this seminar to particularly popular despite it being such an important area of Jiu Jitsu. After all, starting a match isn’t really ‘sexy’ Jiu Jitsu, but how wrong I was lol…

We sold out super quickly and we were still getting messages asking to register up to the day of the seminar.

Rather than cram more people onto already busy mats, we decided to make the footage available to anyone who wants it.

So what does the seminar cover? Good question! The simple answer is sooooo much technical and strategic info on starting a match the right way. Broadly speaking the seminar is broken down into three sections.

Part One covers the gripping strategies and the best takedowns for BJJ. Check out this short sample from the seminar of an important gripping strategy and takedown entry.

Part Two covers guard pulling including the correct mechanics for pulling guard and why you need to know the double pull. Check out this short sample covering a key guard pulling concept:

Part Three is all about strategy and covers when you should pull guard, how to cheekily steak two, and what to do when it all goes wrong.

Obviously, that’s a very brief outline and there’s a lot more covered in the is 70+ minutes of footage.

However, despite teaching for three hours, we didn’t get through everything we wanted to cover at the seminar. So Chels and I have decided to add on a couple of bonuses to fill in the gaps.

Firstly, we’re including the 60+ min Takedown Blueprint. This covers my complete takedown plan from gripping to takedown and beyond. This Blueprint is a simple and super effective chain of attacks starting from just one grip anyone can use.

Secondly, we’re including a previously unreleased 25+ min video covering how to attack from the Double Guard Pull. Even if you never plan on double pulling, it’s a good idea to know who to attack from this position as you could end up in it any time you sweep.

So what’s the cost?

For a limited time, you can get the seminar and bonuses for only £27. After that, the footage will only be available to Escapology Online members.

All you need to do is click the link below, complete your purchase, and you’ll get instant access to all the videos.

Get The Seminar & Bonuses Now!

If you want to learn the best way to start a Jiu Jitsu match, this is for you.

When we started selling instructionals, we made two promises to ourselves:

(1) The instructionals will ALWAYS be available to download if you lose them.

(2) If you don’t believe the cost of the instructional was worth the investment, I’ll give you a full instant refund.

We stand by this guarantee today. If for any reason you’re not 100% satisfied, let us know and we’ll give you an instant refund. Or if you ever lose a copy of an instructional send me your receipt and I’ll send you a new copy.

Remember, this offer is only available for a limited time after that the footage only be available for Escapology Online Members. To get your copy click the button below.

Get The Seminar & Bonuses Now!